There are some things one does knowing they won’t be enojyed. One does them anyway because they are supposed to be something special, legendary and already therefore worth seeing once in a lifetime. Then even being aware it’s not the kind of things one usually likes, one still wants to have a look at it, just because it is THE THING … and afterwards you ask yourself: was it really woth it?

The Full Moon Party in Ko Pha Ngan was one of those supposedly legendary happenings, about 50.000 people pilger to the small island every month for the original, twelve hour or more, limitless party on Hat Rin beach. Before deciding to go there, I was doubtful whether it would be a good idea, especially because Israel and Carola only had three weeks to spend in Asia and we wanted them to have a maximum of good experiences. But a German couple we met in India – rather calm, not crazy party people – told us, it was still an interesting experience for once in a lifetime.

We already got an idea of what it was going to be on the way to the island. A crowd of hundreds of people thrusting themselves around the boat jetty, anxious to get on the small and totally overcrowded speed ferry. The boat went completely overcharged of people, many of them sitting in the pathways because they didn’t find a seat and in case of an emergency it would have been death sentence for most of us on board. In order to distract us they put the film Thor on a large flat screen television, on of the most senseless and stupid films I’ve seen recently. 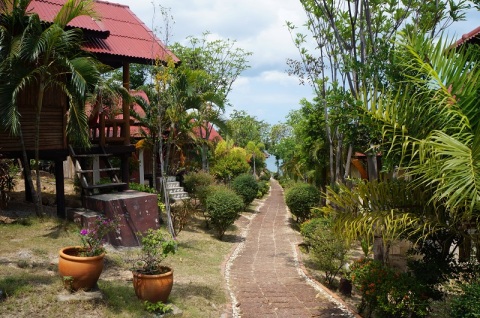 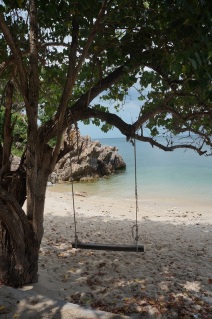 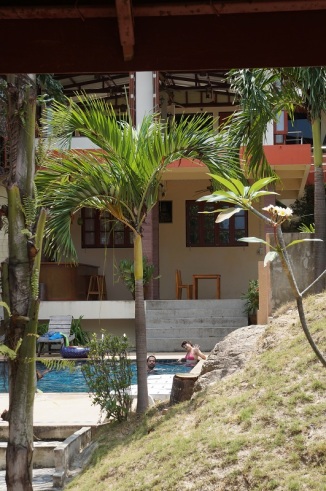 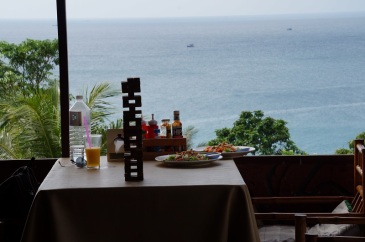 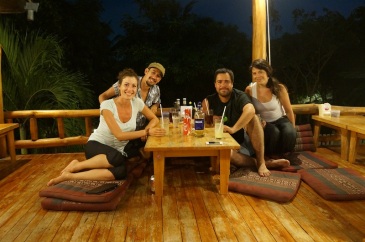 Luckily we chose a hotel on Haad Yao beach on the North Western stretch of the island, far away from the Full Moon Party craziness. Located on the middle of green hills, with terraces, pool and direct access to a small, private bay it was a very beautiful place to stay, relax and escape the Thai summer heat. The perfect place to bring down the strains of the previous day’s journey – we had got up at 5am to catch the bus in Ko Lanta – and prepare for the Full Moon Party night, with a Bauzá pisco our friends had brought all the way from Chile. 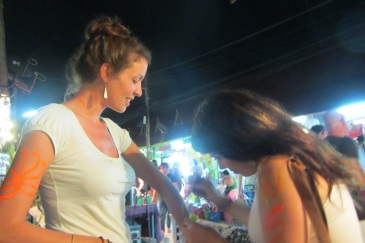 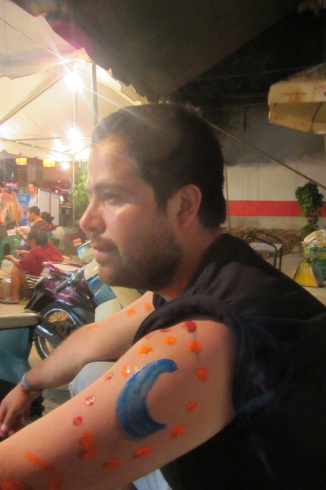 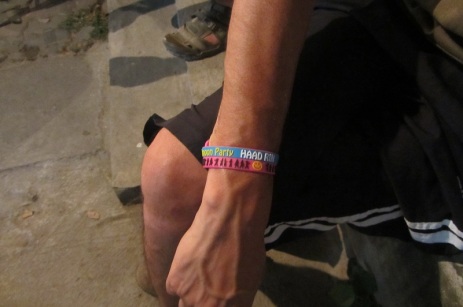 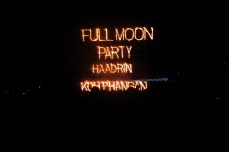 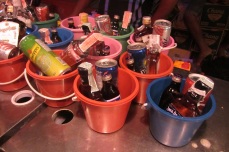 We started our long taxi – our rather giant Tuk-Tuk – drive towards Hat Rin around 10pm and we where about the last to leave. Arriving there the party was already at its peak, the beach packed with people in neon shirts, the-shorter-the-better shorts and the body colored with neon body painting, most of them carrying the emblematic bucket, a plastic Eimer one buys at one of the numerous stalls for 600 Baht (13 Euros), containing a small bottle of toxic Thai wisky with ice and soft drinks.

As expected, the beach was packed with people, one crazier than the other, shaking their bodys with the beat of cheap techno music droning from the loud speakers. Others refreshing by jumping around in the Brandung, most of them already pretty wasted and so falling down every second step. 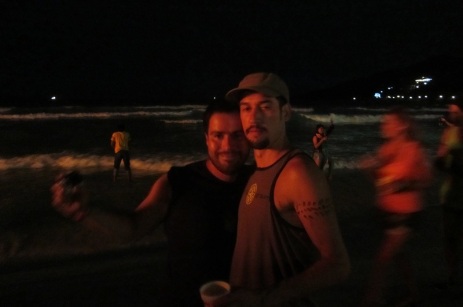 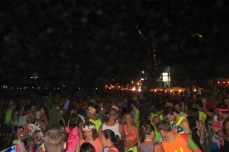 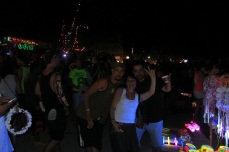 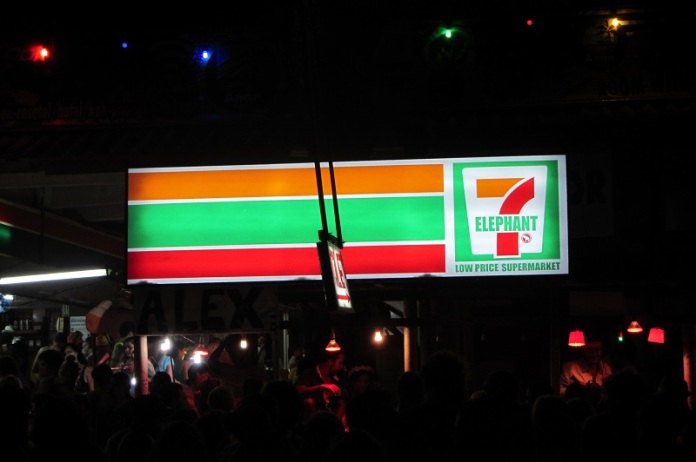 The later it got, the crazier the faces and movements became, the more people lying around sleeping – there were even particularly indicated sleeping areas on the beach – or discharging their toxic and shaken up interior through all available body orifices into the ocean. 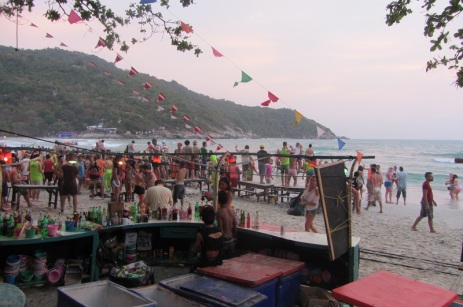 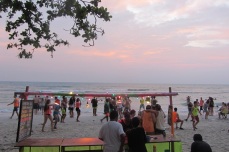 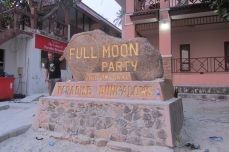 An experience, definitely. Perhaps ten years ago, by the age of 18, I could have enjoyed it, but still then I’m not sure. But nothing close to legendary or unique when it comes to size or location of the party. For large parties on the beach, spend on New Year’s eve in any coastal town in Brazil and you will have a similar amount of people, but much better ambiance and far better music and – what is perhaps the most important ingredient of a joyful party night for us – authenticity. 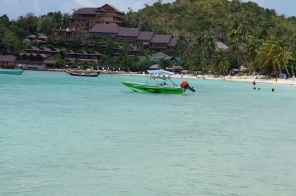 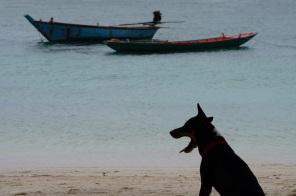 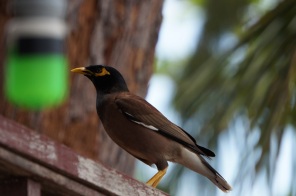 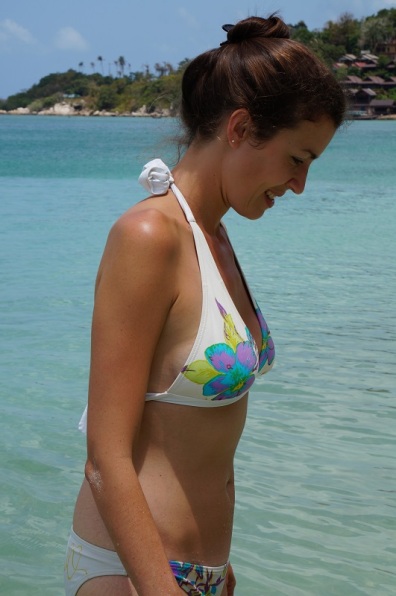 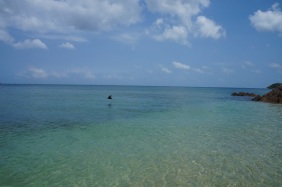